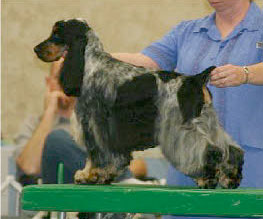 For each breed the AKC registers, there is a breed standard which is a word description of the perfect dog of that breed. Standards describe the mental and physical characteristics that allow each breed to perform the function for which they were originated. The standard describes how the dog's looks, its movement and temperament. Breeders involved with each breed are attempting to produce a dog that most closely conforms to the breed standard. In this respect, dog shows are not unlike cat shows, bird shows, cattle shows, horse shows, etc. In fact, for almost every species bred by man there are competitions among breeders. AKC approved judges examine the dogs and place them in accordance to how close each dog compares with their mental image of the "perfect" dog as described in the breed's official standard. 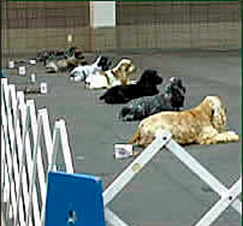 Consider taking obedience training with your dog to a whole new level. Enter the world of AKC obedience and help your dog realize its full potential by competing in obedience trials and earning obedience competition titles. AKC Obedience Trials demonstrate the usefulness of the purebred dog as a companion to man. Obedience trials showcase dogs that have been trained and conditioned to behave well in the home, in public places, and in the presence of other dogs. AKC trials and tests allow exhibitors and their dogs to enjoy companionship and competition as they proudly earn AKC titles. 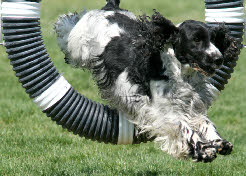 This is one of the fastest growing dog sports in America! Agility is a sport that appeals to all dog lovers - from the young to senior citizens. It has great spectator appeal. Agility is designed to demonstrate a dog's willingness to work with its handler in a variety of situations. It is an athletic event that requires conditioning, concentration, training and teamwork. Dog and handler negotiate an obstacle course racing against the clock. 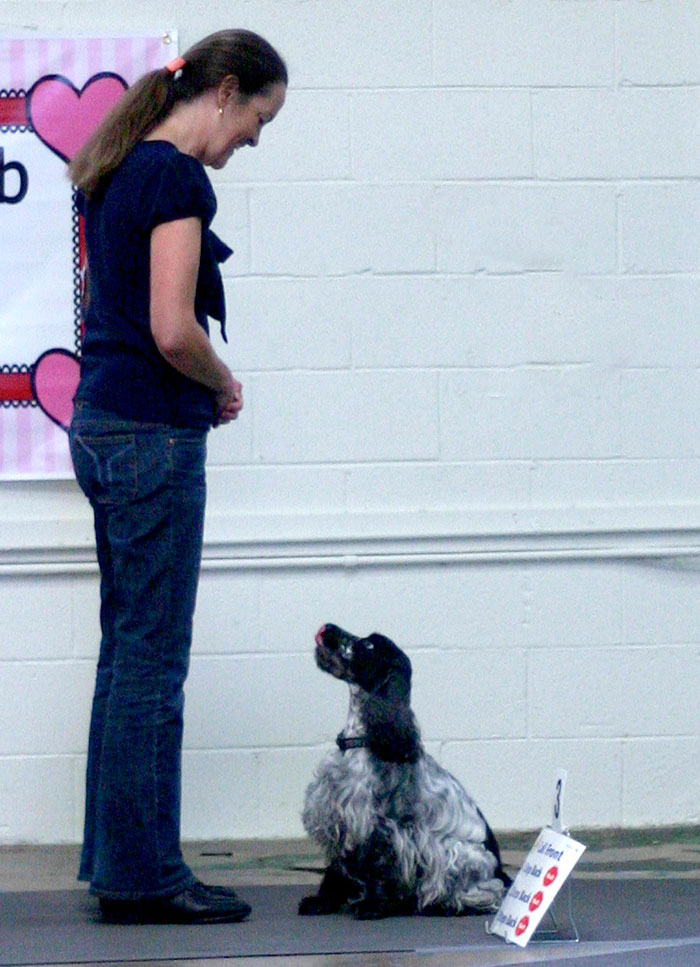 AKC Rally is the new dog sport that is taking the nation by storm. It is a successful stepping stone from the AKC Canine Good Citizen® program to the world of obedience or agility. Rally offers both the dogs and handlers an experience that is fun and energizing. The canine team moves at their own pace, very similar to rally-style auto racing. Rally was designed with the traditional pet owner in mind, but it can still be very challenging for those who enjoy higher levels of competition.

A rally course includes 10 to 20 stations, depending on the level. Scoring is not as rigorous as traditional obedience. Communication between handler and dog is encouraged and perfect heel position is not required, but there should be a sense of teamwork between the dog and handler. The main objective of rally is to produce dogs that have been trained to behave in the home, in public places, and in the presence of other dogs, in a manner that will reflect positively on the sport of rally at all times and under all conditions. 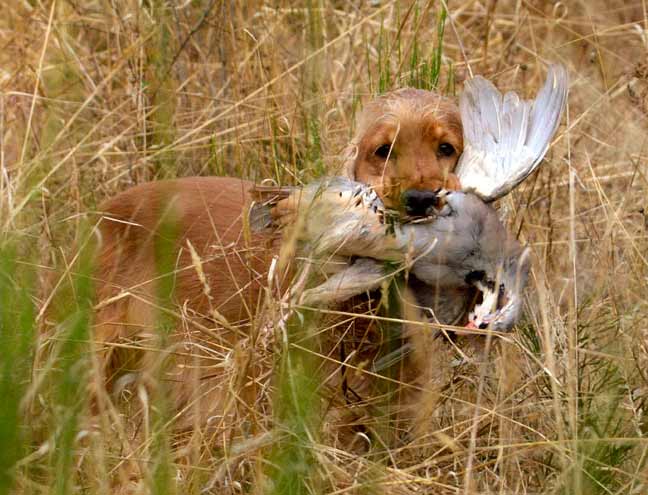 The concept of the Spaniel Hunting Test began as a request for an AKC sanctioned event to be known as the "Spaniel Gun Dog Qualification." It had been recommended that AKC sanction Spaniel breed specialty clubs to hold these tests for the purpose of gauging a dog’s natural abilities during demands of actual hunting conditions. This is a true test of the dogs instincts and abilities to do what they were bred for. 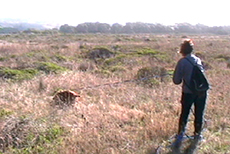 English Cocker Spaniels love to use their noses and make excellent tracking dogs. In AKC tracking tests the dog recognizes and follows human scent. Depending on the skill level required for the test the dog will have to track the scent of a human for a half hour to 5 hours old over terrain up to 1/2 mile, navigate obstacles, and indicate one or more articles left by the human. Obstacles can include streams, fences, logs, road crossings, rock outcropping, windy conditions and change of ground cover. Tracking tests take place in fields and in urban areas. The handler does not know where the track will go and must trust the nose and skills of their dog to complete the track successfully. 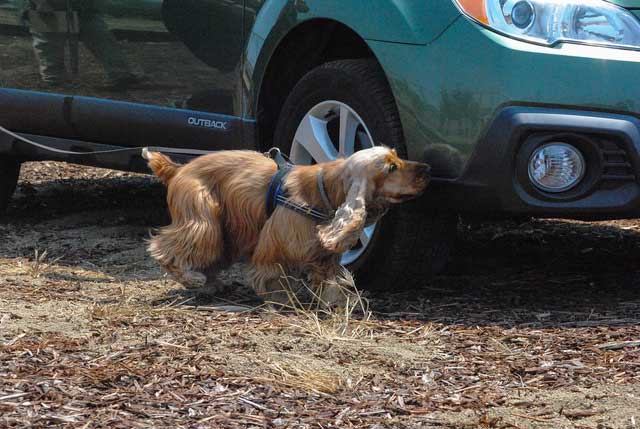 Fascinating fact: Dogs have a sense of smell that’s between 10,000 and 100,000 times Scent more acute than ours! The sport of Scent Work celebrates the joy of sniffing, and asks a dog to sniff to their heart’s content; turning your dog’s favorite activity into a rewarding game. It is a terrific sport for all kinds of dogs, and is a wonderful way to build confidence in a shy dog. The AKC and the National Association of Canine Scentwork offer this sport for our dogs to show off their exceptional noses.

IN SO MANY DOG SPORTS THE HANDLER IS IN CONTROL BUT THIS ISN’T TRUE IN SCENT WORK. NEITHER THE DOG NOR HANDLER KNOWS WHERE THE TARGET ODOR IS HIDDEN. THE HANDLER HAS TO RELY ON THE DOG, AND FOLLOW THE DOG’S NOSE TO SUCCESS. IN SCENT WORK, IT IS THE CANINE WHO IS THE STAR OF THE SHOW. 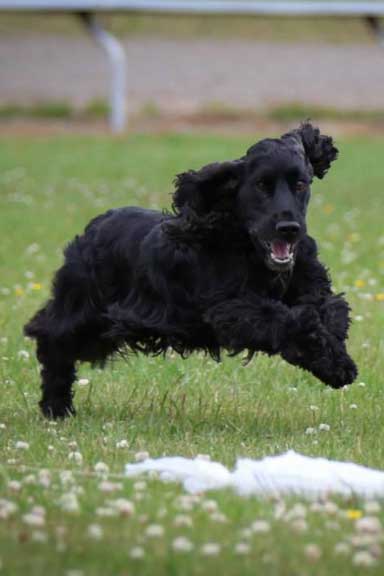 Sure, you think your dog is fast. But have you ever wondered how fast? Can your dog outrun Usain Bolt, who has been called the fastest runner in the world? He just might: Usain's fastest time has been clocked at almost 28 mph - yet dogs have been known to reach speeds of 35-45 mph.

Well, you no longer have to wonder how fast your dog can run. FAST CAT® - wich stands for Coursing Ability Test - is a timed 100-yard dash where dogs run one at a time, chasing a lure. It's over before you know it - and it's nothing short of awe-inspiring to watch your dog run at top speed, ears back, eyes focused, legs strong. And if your dog is really fast, you might earn bragging rights if his name makes it onto our list of top 20 fastest dogs by breed!

Although it is a relatively new sport, its popularity has spread like wildfire. No wonder. According to one AKC official, "The FAST CAT® provides a terrific opportunity to introduce new participants to the world of AKC sports as one of the few events where all that is needed to compete is a dog's natural instincts.” 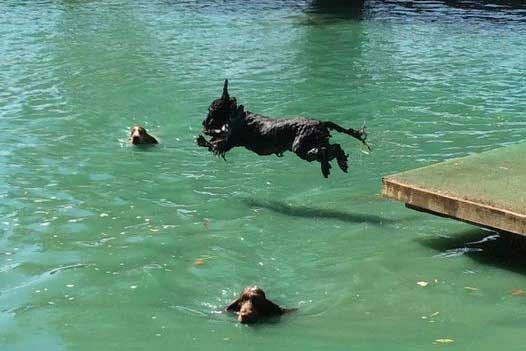 Diving Dogs is a fun, exciting but easy to do sport with simple rules:


You throw your dog’s favorite toy into a pool while he waits on a dock about 40 feet long. On your command, he runs along the dock, flings himself off the end of it, lands in the water and grabs his toy. The goal? To have the longest jump possible, which could be as short as two feet for beginners but could be as much as 30 feet for those more experienced! Diving Dogs is a great activity to share with your best friend!

Titles earned through North America Diving Dogs (NADD) will be recognized by The American Kennel Club. 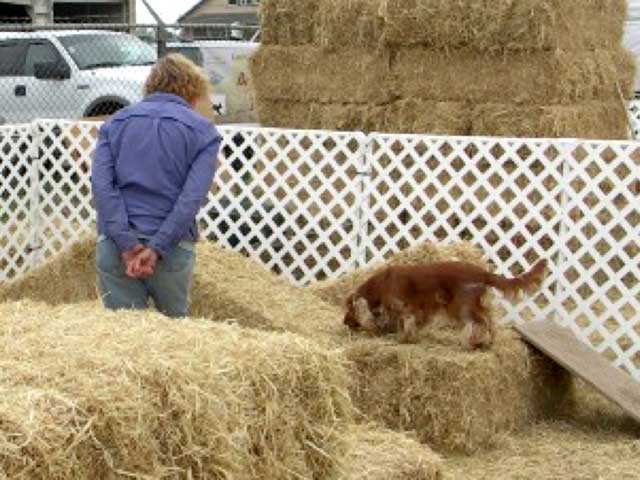 Not everyone will understand the importance of “rat catchers,” but if you live in the countryside, you sure do! “Rat catchers” rid farms of destructive vermin – and the hunting and teamwork skills required to do so are the foundation of the sport of Barn Hunt. Dogs and their handlers work as a team to locate and mark rats (which are always safely held in aerated tubes) hidden in a maze of straw or hay bales. The Barn Hunt Association is an independent organization where titles earned can be recognized by The American Kennel Club. Titles earned in Novice and above will be recognized by AKC.